What's on your mind?

Hi! I need a good screenshot of Hannah, portrayed by Jayne Houdyshell in Little Women (2019), for a post I'm doing on my blog. It would be great if anyone could send it as soon as possible.

I am Romkha and I am new to this wiki. I found this old book in the drawers and I wanted to try it. By far, I seem to like Jo. 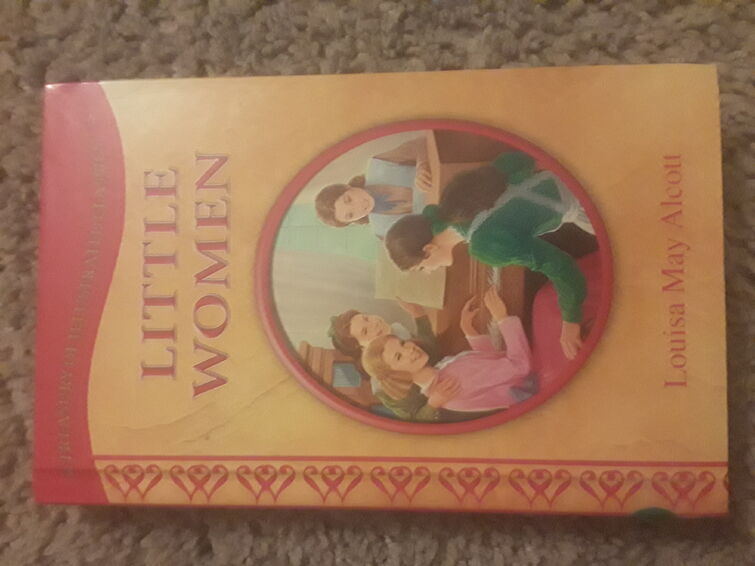 I say mine is Amy and Theodore.

Can you delete this page because no user is able to edit its contents or add it to categories?

Hi, can the admin delete this page as it is not relevant to the Little Women Wiki,

Hi, does anyone know who is/are the admin(s) of this wiki?

I really ship Nat and Dan, can anyone else relate?

Hello. I am working on a fandom called. Classic Literature Wikia, and I hopefully would soon add Little Women to the site. Feel free to check it out or join anytime you like!

Why is the text light gray on a white background, whose idea was that? Can we get that changed?

This is obviously very common.

But Laurie SHOULD'VE ENDED UP WITH Jo for God's sake!

They were perfect, and as much as I love Jo, she really screwed up, rejecting his proposal like that.

And Laurie shouldn't have moved on so fast.

But with Amy! AMY! Her SISTER, of all people!

And then Beth had to die and-

But it ALSO kind of ruined the book for me.

Because I've always loved Jo and Laurie as a friendship AND a relationship.

I think that the articles are very cluttered up and need to be edited immensely! So please do your part!

So this post is very heavily inspired by this video on YouTube created by Micarah Tewers and I'd highly recommend you check it out if you'd like a much more in-depth analysis or a tutorial on how to make a bonnet :)

While I did have an issue with Little Women's fashion choices, I couldn't really put my finger on it until watching this video. I'll sort of be talking about what Micarah mentions, though it'll be slightly different.

They live with four other women and all have new, clean, and tailored dresses?

Anyways, Little Women is set during two timelines, one during the Civil War and one several years after the war.

Marmee, Robert, and the March sisters are all abolitionists with Marmee giving nearly everything she can to help the war efforts and to others like the Hummels.

Why, then, do the March sisters and Marmee all have different, perfectly tailored, and clean dresses in every single scene? I could see Meg and maybe Jo getting newer, cleaner, and better-tailored dresses as they're the oldest, but Amy? I grew up with one sister, and even I still had plenty of hand-me-downs. With Beth and Amy growing up with four other women, it makes no sense for them to have new dresses. At the very least, their dresses should have been a bit too big or a bit too small to indicate that they are not new or made specifically for them.

The Civil War timeline is set during the mid-19th century, meaning the girls should have worn bonnets and simple up-dos, but nowhere in the film are bonnets featured, and very rarely do we see any up-dos. I believe it is only in a Vanity Fair scene do we see Meg wearing a curled up-do. However, in the first Vanity Fair scene, she is seen wearing curled hair. For Meg's character, it makes no sense for her to do this. She and Amy were the only sisters aiming for a higher status, and this meant staying up-to-date with the latest fashion and hairstyles.

Also- in the Vanity Fair scene that Meg's hair is up, she is wearing, even for the time, a very, very modest dress. Most dresses were much more off-the-shoulder and had a deeper V-neck. While this dress is clearly a 19th-century dress, it is not a very common one.

Yet another thing that doesn't make sense is the lack of full dresses. Many dresses had very, very full hoopskirts. We see very full dresses in the scenes set in the 1870s, but this also does not make sense.

Dresses in the 1870s in America were very different than those in the 1860s, a quick Google search will tell you that much. As opposed to the bonnets, simple up-dos, and full skirts of the 60s, the 70s were full of slim in front and full in back silhouettes, curled up-dos, and small hats. Again, this is not the fashion we see in the second timeline scenes. We see simple up-dos and very full skirts, even worn by Amy and Meg.

While the fashion in France was certainly different, it is still a Western country, after all, meaning they will at least be similar. Fashion in France was still full of slim but full silhouettes, curled up-dos, and small hats. Amy coming back to America still wearing 1860s fashion, yet again, makes no sense.

In our first France scene, we see Amy sporting a small hat. This makes sense for the 70s fashion, but it is still accompanied by a rather full skirt, making it still outdated.

How did they even get away with this?

In one of the earliest scenes, we see Jo hitching her dress up to her mid-thigh or knee and running from the publishers to the boarding house. I remember sitting in the theaters thinking to myself 'if women only wore skirts to the knees in the mid-20th century, how is Jo getting away with this in the mid-19th century?'. It does make sense for her character to do this, though it doesn't make sense for absolutely no one around her to have any sort of reaction to it.

Another slightly questionable thing done is during the beach scene where we see Amy having a dress to just above her ankles which would be yet another risque thing to occur during this time that, yet again, no one even glances at. I'm really not quite sure how Marmee even let her leave the house like that.

The timeline confusion could have likely been cleared up if the correct fashion was used.

The staggering difference in the 60s and 70s fashion was deeply underused in this film. 1860s dresses are very full, the hair rather simple, and the bonnets are quite a defining trait of early and mid-19th century fashion. Meanwhile, 1870s dresses offer a much more refined look, full dresses replaced by slimming ones, simple up-dos replaced by curled ones, and bonnets exchanged for small hats.

I saw this film with my extended family, much of whom have not read the book, meaning they left the theater with a lot of questions, the main one being - were there different timelines?

Something I feel would eliminate much confusion would be seeing the two timelines with two completely different fashions, one with full skirts, simple up-dos, and bonnets, the other with slim but full skirts, curled up-dos, and small hats. I feel it would add to the already amazing atmosphere of the movie and show a difference between our 60s timeline and our 70s. As the same actors were used for the child and adult characters, it would have also indicated a sense of maturity and visually shown us that they had grown up.

I really loved this film, I really, really did, but even though I love it, I still do not think it is above criticism. No movie is absolutely perfect, and though I don't really think much of this took away from the film, I do think being more accurate to history would've added a great deal to it.

Where do all the sisters go after they leave the house?

I mean, she drove me crazy. Here's this woman with a voice like a sixty-year-old smoker, playing 12-year-old Amy. It absolutely ruined the movie for me.

So, do you have any thoughts about the new movie. I am so excited to see it? Do you think it will be good? Do you like the cast?

My favorite Little Women character would be Beth. I just LOVE her. Who is your favorite?

The characterization Of Professor Bhaer on Masterpiece adaptation of LITTLE WOMEN: Will he be sexy, old, or completely different from the novel? I think Mark Stanley is pretty cute, and a little young to play Bhaer, but I can't wait to see him do it!